Rules for any mode or modes of transport

Seller hands over the goods to buyer’s disposal at seller’s premises or at another named place. Buyer have to load the goods on any collecting vehicle and have to clear the goods for export, where such clearance is applicable. All costs and risks invloved in taking the goods form the agreed point belongs to buyer’s responsibility.

The seller delivers when the goods cleared for export and consigned into the custody of the first carrier (named by the buyer) at the named place. This term is suitable for all modes of transport, including carriage by air, rail, road, and containerised / multi-modal transport. The risk passes to the buyer at the named point.

The general/containerised/multimodal equivalent of CFR. The seller pays for carriage to the named point of destination, but risk passes when the goods are handed over to the first carrier.

The containerised transport/multimodal equivalent of CIF. Seller pays for carriage and insurance to the named destination point, but risk passes when the goods are handed over to the first carrier.

The seller delivers when the goods, once unloaded from the arriving means of transport and are placed at the disposal of the buyer at a named terminal at the named port or place of the destination. Indispensable that both parties have to specify delivery terminal as clearly as possible. The seller bears all related costs and risks to that point.

Goods are delivered when it placed at the disposal of the buyer on the arriving means of transport, ready for unloading at the named place of destination. Costs and risks to that point are for the account of the seller.

This term means that the seller pays for all transportation costs and bears all risk until the goods have been delivered and pays the duty. Also used interchangeably with the term "Free Domicile". DDP represents the maximum obligation for the seller, but the most comprehensive term for the buyer. In most of the importing countries, taxes such as (but not limited to) VAT and excises should not be considered prepaid being handled as a "refundable" tax. Therefore VAT and excises usually are not representing a direct cost for the importer since they will be recovered against the sales on the local (domestic) market. 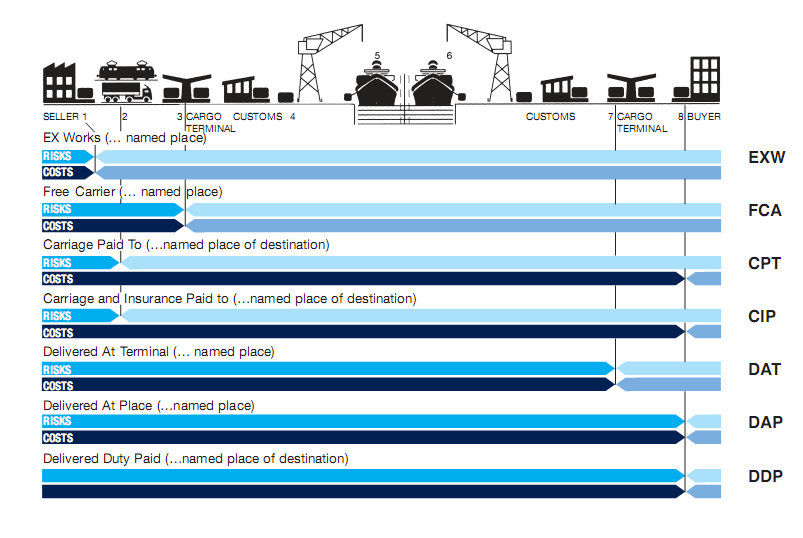 Means that the seller delivers when the goods are placed alongside the vessel nominated by the buyer at the named port shipment. The risk all costs from that moment onwards. In containers it the FCA rule should be used.

This rule is to be used only for sea or inland waterway transport. „Free on Board” means that the seller delivers the goods on board the vessel nominated by the buyer at the named port.

FOB may not be appropriate where goods are handed over to the carrier before they are on board the vessel, for example goods in containers, which are typically delivered at terminal. In such situations, the FCA rule should be used.

The risk passes when the goods are on board the vessel. The seller must contract for and pay the costs to the named port of destination. The seller also contracts for insurance cover against the buyer’s risk of during the carriage. CIF may not be appropriate where goods in containers. In such circumstances the CIP rule should be used.